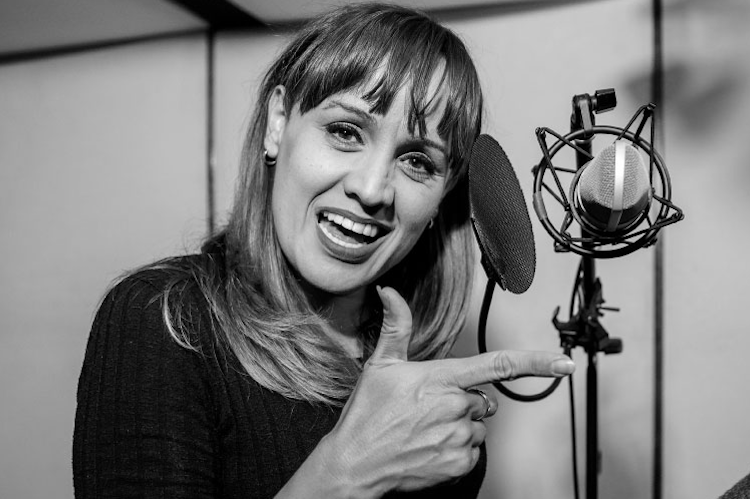 Liliana Barba, Mexican voice actress and dubbing director. You may recognize her as the Latin Spanish voice for Lizzi McGuire; Chuckie Finster in Rugrats; Daisy, Donald Duck’s girlfriend; and recently also Vanellope in “Wreck It Ralph” and Gabby Gabby in Toy Story 4.

Toy Story is undoubtedly one of the most important movie releases this year. What did you think of the movie?

I have watched it like three times, and I am excited to have it in Blu Ray. I think it is one of those films that you need to observe as a culture icon. It hasn’t been long since its release, and it is already a classic.

“I think that the movie’s them stays with you. Some critics mentioned it is much deeper than the other tree parts. I found the first movie absolutely magnificent, and I would say this one is a close second.”

To me, Toy Story 4 was incredible. Great story, amazing production, and as a plus, the Latin Spanish dubbing was on point, and touched us all deeply. The movie director Ricardo Tejedo is the main directing figure in Disney and many other production companies nowadays. I think it’s an absolute hit!

What does it feel like to work in a saga like Toy Story? You play the character of Gabby Gabby, which is now part of the history of animation.

What does it feel like… I started working in dubbing 23 years ago, and everytime I play a character as wonderful as Gabby Gabby, it feels like a reward to my efforts, dedication, discipline and, above all, the timeliness of my work. Toy Story has meant a great deal. As we worked on it, we all know we were leaving a significant mark in the history of Mexican dubbing.

Not only that, but your son has also been part of the dubbing team, voicing Andy. How was the experience for him?

Oliver (Lili Barba’s son): My first reaction when my mom told me I had the role of Andy was… I went bananas! The first thing I did was watch Toy Story 1, 2 and 3. After that, I knew more or less what I had to do, even if I only had 5 loops. I was really excited, because it is a project I never even thought I’d get to take part in.

How do you prepare for a role like this? Do you make a character study before starting the recording, or do you trust your instincts and feelings after getting to know the character?

You might think that we are given a version of the movie for study purposes, or the script, but not really. We can only count on our experience. The only guidance we get is the moment of arrival to the recording studio, other than the director’s notes, and we only have one rehearsal before recording starts. The director provides a background for your character, their motivations, their story, their description, their attributes. We get all this information upon arrival to the recording studio, but not before, so you’ve got to come up with the character on the spot.

“While dubbing a character, we have the reference of the original character’s performance in English, with its specific personality already built in. We need to follow that model, as well as its intention, as much as possible. Some things inevitably change in the translation process.”

We need to understand this, merge with the character and play it in our own language in a way that sounds credible, since obviously the way we talk in dubbing is not the way normal people speak in the US. We express emotions and feelings differently. That’s what we need to do, that’s how we get ready.

Acting is the best way to prepare, to convey the right feeling for every scene, and to touch the audiences with our performances.

Tell us about the process to get to know a character. You play a completely new character, while your son plays Andy, whom we’ve seen grow up and develop in previous movies.

That’s what I meant before about my character – it was created by Disney, but the performance, the bio of the character that the director gave to me, was produced on the spot.

“My son played Andy, and that worked well, as he is a fan of the Toy Story movies. He did a voice test in order to get the role. And when he came out of the recording booth, he said, “mom, I want to watch the other three movies again in order to get this right.”

Even though the character doesn’t have a lot of lines, and he hardly shows up in the movie, the dialogues he recorded were wonderful because he had a clear idea of who the character was, as he has known him his entire life. He knew the character’s intentions even before his recording session.

He did very well, the recording process was quick and he was fascinated with the work – and that only happens when he genuinely likes the results! It was a very important project for him.

What is harder, in your opinion? To play a new character that no one knows yet, or a character who has a distinct history and development in the saga?

I think it was easier for Oliver, since he knew his character’s history, his background. It was much harder for me, because we had to come up with a character, create its intentions, imitate as much as possible from the English version. We need to own the emotions that the character conveys. It’s a much more complex process.

Playing a character like Andy means there are some large shoes to fill, for sure, but I feel it was definitely more difficult to play Gabby Gabby.

What kind of characters would you like to play in the future?

I’m very excited about Disney’s announcement that Lizzie McGuire is now an adult. I was the voice of Lizzie McGuire (Hillary Duff) in the previous show and in the movies – I have played her character throughout the years.

I think that is one of my next short-term goals, to dub the new Hillary Duff’s show. I would be thrilled to work on this new version of Lizzie McGuire!

Is playing an animated character the most enjoyable part of this line of work?

I think so! I love dubbing animation, from Japanese anime to Disney cartoons. I am also the voice of Daisy Duck, Donald Duck’s girlfriend. It’s a lot of fun, and helps me keep in shape to play these kinds of characters.

I also worked recently on WiFi Ralph, the second Wreck-it-Ralph movie. I had the chance to play Vanellope. It is wonderful to play such a beautiful character as Vanellope, or Daisy, and I find it easier to play cartoon characters. Seriously, I am crazy about animation!

In your opinion, what are the main differences between dubbing motion pictures and other kinds of recording work?

There are very clear differences. When we watch TV in our homes, as big as the screen can be, it can still not go beyond 50 inches. Facial features are small in those. But if you go to the movie theater, faces get much larger, mouths become very noticeable. And dubbing needs to be done in perfect lip-sync. That means that, when the character opens their mouth, the dubbing actor does, too, and viceversa. And lip sounds need to match: words with M, B, P. Words ending with open vowel sounds also need to match.

“Dubbing for movies is much more specific than voicing a TV program. Dubbing for motion pictures requires much more fine-tuning. I was able to finish my lines in one day, in this case, but a full recording for a movie can take up to 3-4 weeks. So yes, it is very different!”

How does a voice artist get to be a dubbing actor? What skills are needed, and what are the steps to follow?

As a voice artist, we are used to modulate our voices and to convey certain intentions, but I think that, in order to become a dubbing actor, it is necessary to have a background in acting. You are acting with your voice, even if not with your body, and yet you need to convey emotions to the viewers just as convincingly. If your voice is not trained for the performing arts, to express those emotions, it is much harder to advance in this career.

I always say that an acting career is the best skill to have in order to pursue dubbing, and these are the steps to follow:

“First, do some acting courses, or even better, get an acting degree. And then, specialize. Why? Because dubbing is a specific branch of acting, much like cinema and theater. Dubbing actors have different techniques than those of all other disciplines.”

Lastly, one needs to be always up to date. Never stop studying and training, always take care of your voice and keep experimenting, researching and suggesting new performances. Challenges are necessary to keep moving forwards.

Lastly, what would be your advice for all those people who want to work on voice over?

First and foremost, always be prepared. This business is a marathon, not a sprint, and the ones who succeed are the ones who have better training and self-belief. Of course, a good voice is always a plus, but you need to know how to speak, how to manage it, how to modulate it accordingly to convey emotions – otherwise, you won’t get far. My advice is always the same. Get ready to reach the top and achieve all your goals.

I love you guys. I admire the people working at DVO greatly. I send you a big hug and wish you the best, thank you for the honor of this interview. You are lovely. Long live DVO!

You may also like
Horror Movies: The Most Terrifying Voiceovers in Trailers
Voice Acting in Video Games. Casting and Production Process
Interview to José Luis Angulo. Spanish Knight Rider’s Voice