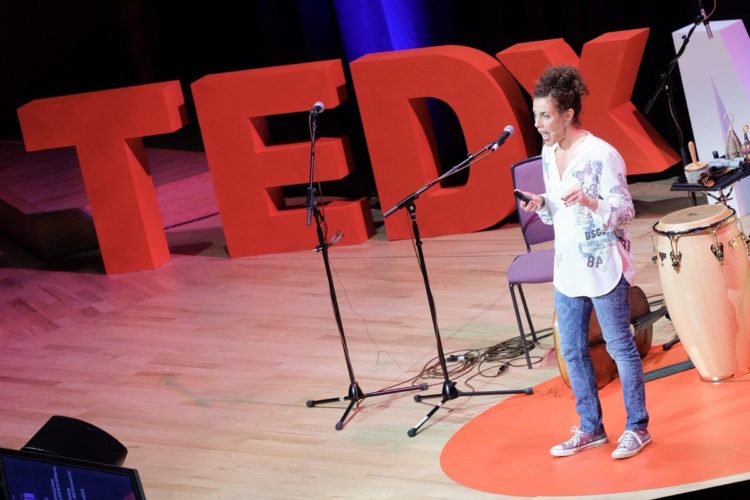 Interview with Nadine Shenton, an UK’s award winning female voiceover artist. Former Royal Shakespeare Company actress she is now well known for voicing recognized television and radio commercials, web animation, corporate, narration, e-learning, IVR or apps. We couldn’t miss the opportunity to talk about our industry with such a talented and experienced voice over artist.

You are UK’s award winning female voice over artist, how does winning a prize at this level affect your career?

I was delighted to win an award for Female Voiceover artist 2017. It’s a great honor, the talent out there is immense, and I love that campaign I did for BMW. I think it offered the right style of tone for that BMW campaign, which was sultry, soft, and very invocative.

Moreover, you are the winner in Vox 2017, what are the keys to becoming a great professional like you? What does it take to be an excellent voice over?

In order to be a great professional and to be an excellent voiceover artist, I think you need to know what the client is looking for and understand the style and tone and the pitch and the pace that the client wants. You might have a very good voice, but it doesn’t necessarily mean that you’re a very good voiceover artist. And you have to understand what it is the client is looking for and what the brand needs in order to sell the product. That is a lot to do with what a voicing artist does: the interpretation of the script and taking the word off the page.

You have also been former Royal Shakespeare Company actress, how has it helped you in your voiceover career?

As an actress, having worked with the Royal Shakespeare Company, in order to be a very good voiceover artist you need to understand script, and tone, and the characterization of the character you’re portraying, whether or not it’s animation or commercial or corporate or web animation, and therefore to understand where the character, where the voice is coming from. It’s no good just making a voice if it’s quite superficial. You’ve got to understand the complexities behind it, and also physically to feel it, which then portrays the voice even more.

In what kind of projects do you like to work the most and why? (e-learning, corporate, commercial, etc.)

The kind of projects I like to do as a voicing artist are really quite diverse: they can be web animation, commercial, character, e-learning, corporate… It’s also because it stretches your voice, your sound, your character. You can go all the way up there to something very low and sexy down here. It can be very provocative, very sensual, or it can be something like a witch hahahahaha. So it really depends, it can be quite diverse. And the lovely thing is you don’t know what you’re going to get on a script until you’re given it. And the lovely thing is that the client trusts you, that your interpretation and your style, the way you use your voice, is what their client wants and what the product needs in order to sell it.

You’ve worked in television before, what are the differences between recording on a television studio or a home studio?

So, I’ve worked many times in a television studio, obviously in vision, as in in front of camera, in comparison to working in my studio, working in an enclosed space, which is quite isolated. Obviously when you’re live in front of a television, you are animated or obviously you’re portraying a character in a different way using your visual looks as much as you’re using your tone of voice. With a studio, a home studio, where you’re just recording the audio, then you’ve got to make that character come alive even more by the sensuality or tone and inflection of the voice. Because, of course you can’t see the person, so you’re depicting the character and portraying the character by the audio, the mood, the tone, pace, and the way you use your accent, or maybe the pitch of the voice, which might depict if you’re urgent, if it’s in a hurry, or if it’s slow and calm and authoritative.

What do you do to promote your voice, to make people know you?

The way I promote my voice are several ways. I of course have a website. There of course I show my huge versatility of my voice, I have animation, commercial, character, voice of God, e-learning, A whole eclectic bunch, also main clients like Amazon, Garmin, Bulgari, Bupa, Trivago, lots of campaigns for television, for radio, for cinema, and it shows you my range as well. Also, networking through LinkedIn or just catching up with clients that I’ve worked with before, and reminding them you are always available to work with them.

What do you think about the current situation of the voiceover market nowadays?

I think the current situation of a voicing artist now is very difficult. As a result of social media, everything is current, instant, and as a consequence, it might not be the case that they’re being booked by their talent: it’s more that they might be very very hot on the social media and the promotion side of it, but it doesn’t mean that they know what they’re doing. And I think nowadays there are so many voicing artists out there that it’s quite difficult to choose who’s got the experience, and to go look at the website and actually see the client list and the database and also how many years the person has been a voicing artist.

And, do they take direction well? The most important thing I think about a voicing artist is that you need to listen to the client, listen to the director, as much as be able to deliver a voice, a character. Because it’s no good giving your own interpretation if that’s not what the client wants.

I think I’m pretty versatile, and as a consequence, I love to take direction well, which is what my studio offers and what I like to do best. And with my years of experience as an actress behind me, I’m able to offer a whole range of voices and great versatility.

Nadine has also presented a TED TALK at the important conferences TedXManchester2018 on The Workings of a Voiceover. You should watch it, it’s a must: